Only 13 corporations control 19-40% of the largest and most valuable stocks and 11-16 % of the global marine catch, according to new research published in the journal PLOS ONE, authored by researchers at GEDB, the Beijer Institute, and Stockholm Resilience Centre. These "keystone" corporations of the global seafood industry critically shape the future of marine ecosystems.

The new study makes an analogy between the largest companies in seafood industry and keystone species in ecological communities. Keystone species in nature have a profound effect on the structure and function of the ecosystem and disproportionately determine the prevalence and activities of other species.

"The phenomenon of keystone actors is an increasingly important feature of our human-dominated world. Active leadership in sustainability initiatives by these corporations could result in a cascade through the entire seafood industry towards improved management of marine living resources and ecosystems," says lead author Henrik Österblom, Stockholm Resilience Centre.

"Increasing demand for seafood has contributed to a global fisheries crisis, with consequences for marine ecosystems around the world," Österblom adds. Existing analyses of global fisheries operations have, however, so far largely focused on the role of countries, rather than industry corporations.

A handful of dominating corporations

The study found that the average annual revenues of the 160 largest companies in 2012 exhibit a distinct keystone pattern, where the top 10% account for 38 % of total revenues. Among these, the authors analysed thirteen companies more in detail and found that they shape very large marine ecosystems around the world and are involved in both wild capture fisheries and aquaculture, including whitefish, tuna, salmon, shellfish, fishmeal, fish oil, and aqua feeds. Their combined annual revenues correspond to 18% of the global value of seafood production in 2012 (US$ 252 billion). This handful of corporations, represent only 0.5% of 2250 registered fishing and aquaculture companies worldwide.

Such keystone actors among corporations, the authors say, can be defined by the following characteristics: a) they dominate global production revenues and volumes within a particular sector, b) control globally relevant segments of production, c) connect ecosystems globally through subsidiaries, and d) influence global governance processes and institutions.

"Several of the fishing companies we investigated are larger than most nations in terms of their share of global catches. Our study reframes the responsibility for fishing in terms of transnational corporations, illustrating that they must be included into the equation if we are to solve the global sustainability crisis in marine ecosystems,” says co-author Jean-Baptiste Jouffray, Phd-student affiliated to all three institutions.

The research article has received much acclaim, The Guardian wrote an article about it titled "a handful of corporations could hold the answer to crisis in the seafood industry" and in it they touched upon not only this article, but also another publication by GEDB authors,  Masked, Diluted and drowned out published in the Journal Fish and Fisheries. Inspired by this publication, the Guardian noted that currently consumers are being told to buy the ‘proper’ fish only, in order to support legal and well managed fisheries, but how easy this is for consumers is debatable. The Guardian:

"...being an aware consumer is not enough. A[other] recent study from the Stockholm Resilience Centre shows that despite fish species being on the brink of extinction, this is still not reflected in the prices consumers pay.

Global trade guarantees consistent availability of fish at affordable prices. When a fish stock collapses in a region, suppliers source fish elsewhere with barely a dent in fish prices. The upshot is that consumers never receive a signal that marine ecosystems are on the verge of collapse until many reach breaking point”

Moreover, not only are these suppliers, or 'keystone actors' an opportunity to intervene in fish stock degradation, in fact this industry is already doing so, to certain extents. The Guardian:

"These companies, some of which have been around for more than a hundred years, have historically developed important innovations in the fishing sector, including techniques that have enabled a global expansion of the fishing enterprise. They continue to do so, for example, by addressing sustainability concerns in the aquaculture sector and by reducing waste in production chains. Several are now developing ambitious sustainability strategies.

Critics will say they are acting to preserve their reputation. However, many of these companies know the research. They know their businesses are threatened if stocks collapse globally.

This is not a superficial branding strategy – it is one of survival.”

Undercurrent news also wrote an article about the Keystone paper, that can be found here

Finally, for an article by SeaWeb on the matter, see here. 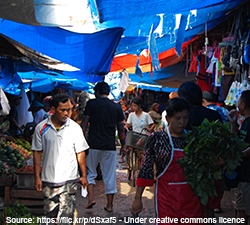